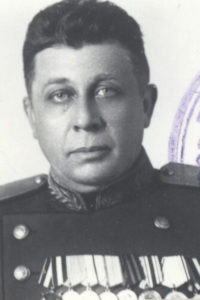 Boreyko was the very first minister of Transportation of the RSFSR in 1939-1940!

Made of solid silver and enamels. Measures 46.20 mm in height, including its eyelet and 37.45 mm in width. It weighs 25.7 gram. The reissue serial number and the mint mark Monetni Dvor are located at the 6 o’clock position of its reverse.

This order of the Red Banner is in an excellent, well above average condition. The details are crisp and the enamel is flawless without flaking or scratches. All gold plating is present and its connection ring has not been cut. The double layer steel suspension is time period to the award.

Reissue awards were given by the Soviet Government to a recipient, as a replacement piece, in exchange for the same order or medal of an earlier type which was no longer authorized for awarding by new regulations. The new reissue piece retains the serial number from the original award piece. Many early suspension or screwback awards were exchanged for the new type of award, particularly during the period immediately following the end of the Great Patriotic War. During the June 1945 Victory Parade in Moscow following the defeat of Germany in World War Two, soldiers participating in the Parade were expected to have the latest type of award on their uniforms and undoubtedly many were exchanged for that parade. These pieces are extremely rare.

“Comrade BOREYKO, working in the Agency of Automobiles and Tanks of the Southern front, occupied the position responsible for repairs and supplies.

He proved himself as a good manager, who built well functioning combat and support vehicles repair organisation under him in short time. Due to his personal dedication and attention, it was possible to evacuate from the battlefield and restore 400 tanks and large quantity of other support vehicles. Being present on the frontline, he inspired his subordinates by personal example and thus accelerated the return of the machines back into the line.

Comrade BOREYKO is a proactive and highly educated commander. His combat merits are in well organised and executed evacuation of whole repair factories and repair battalions. Thanks to his effort, the front has not lost any evacuation and repair assets.

For the achieved results, he is worthy of a state award order “Red Banner”.”

Full translation of the research:

BOREYKO was a mechanic engineer. He graduated from the Military Engineering Academy in 1932 and was admitted as a leading engineer at the armour test ground. In the 1930s he rose through different positions within the same field – armour and transport vehicles application, maintenance, and repair.

He also wrote some the maintenance manuals for RKKA, f.ex. for the tank T-26. In 1939-1940, he was the very first transportation minister of the RSFSR (called back then People’sCommissar of Auto-Tranport).

Later in September 1940, he was assigned to the role of Head Engineer of the 7 mechanised corps. After the German attack on USSR, the 7 Men. Corps was deployed in June 1941. In July 1941 it had clashes with 7 Pzr. Div. and 12 Prz. Div. near Smolensk. The corps was encircled in the pocket between Smolensk and Orsha by 15 July. Corps headquarters and two tank battalions broke out and joined Rokossovsky’s group. But BOREYKO, nonetheless, was officially considered MIA in 1941. There is paper trail on him being declared MIA in 1941.

BOREYKO was quickly back in service: on 15 Feb 1942, he was the deputy Chief of the armour repairs of Southern front (document with his signature in this role is included). He again rose through different positions with the same responsibilities. He honourably retired in 1960. Being born in 1903, he lived at least until late 1990s.

More info on Boreyko can be found here and here

Next to the citation and register card I also added some scans in the picture gallery of a document stating Boreyko went MIA and articles about him in a magazine and in the newspapers ‘the Red Star’ and ‘the Red Banner’.

Boreyko was a participant of the 1945 Victory Parade. Although not entirely sure it looks like Boreyko is portayed in this video at 2.13-2.20 min