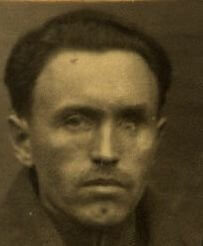 For conducting dozens of combat sorties, fighting off a 5 times as numerous enemy group of Me-109s and Ju-88s, downing 3 Ju-88s and successfully returning his plane to the base after being wounded 6 times, only loosing consciousness after he safely landed his plane

Recommended for the title Hero of the Soviet Union

Made of solid gold, platinum and enamels. Measures 40.06 mm in height (including the top of the flag pole), 38.37 mm in width and weighs 35.8 gram without its screwplate. The mint mark Monetni Dvor and the serial number are located on its reverse. This is a scarce screwback variation which were awarded before June 1943. The lowest known serial number for this variation is #6372 and the highest known number is #13378. About 7,000 of these were awarded.

This original order is in superb, far above average condition for an early screwback variation awarded for combat merits. Its details are all perfectly crisp and the higher laying parts of Lenin’s face show light wear only. Its enamels are without repairs and very well preserved and shows a minuscule superficial chip on top of the red banner (barely visible with the naked eye) and an internal crack on the lower part of the banner of the right side only. The reverse is in mint condition without any dings or scratches its screw has not been shortened. The order comes with its time period and well fitted silver screwplate and there have been no repairs or conversions.

Lt. Labutin was wounded badly and most likely never had a combat position after he was awarded this Order of Lenin. This could very well explain the unique condition this order is in.

A wonderful award with very amazing research and near perfect condition. Very rare as such!

Senior Lieutenant LABUTIN conducted 73 combat sorties during his service on the Leningrad front in the period 04.10.1941 – 26.12.1941. Of these missions: 40 ground strike missions, 15 protective cover to the ground troops. He was engaged in 18 air battles. The effectiveness of his ground strikes was confirmed by the commanders of 54 Army, such that LABUTIN received a commendation for his effort. The ground strike missions resulted in the following damage to the enemy: 20 machine guns and AA cannons were suppressed, 5 artillery positions destroyed, eliminated up to a battalion of enemy troops.

According to the directive issued by the Peoples Commissariat of Defence, comrade LABUTIN was twice recommended for a state award (first time for “Red Banner” order, and the second time for “Lenin” order). But because the headquarters of the army aviation group were subjected to the enemy attack, it appears the documents have been lost and the veteran has not been bestowed yet.

He has participated in 9 air battles. He personally shot down 1 enemy aircraft Ju-88. And in a group – 2 Ju-88s. In the air battles, he proved to be an exceptionally brave pilot. Despite enemy superiority, he engaged in an air fight against 5 Me-109 and 1 Ju-88 and came victorious out of this engagement.

On 10 July 1942, he encountered 5 times as numerous enemy group of Me-109s and Ju-88s. LABUTIN kept in the engagement for 20 minutes. He was wounded 6 times in the legs and the arms, but nonetheless remained in the fight. Even when a projectile fragment severed his eye and the blood poured down the face, he remained in the air battle until after the German vultures were scattered. Bleeding, he brought his aircraft back to the base and successfully landed loosing consciousness after that on the ground. For exhibited exceptional courage and bravery in the struggle against the German invaders, he deserves state award – title “HERO OF SOVIET UNION” accompanied with bestowal by order “LENIN” and the medal “GOLD STAR”.

The translation of the research can be read below

More info on Lt. Labutin can be found here

In the picture gallery scans scans can be viewed of the following: