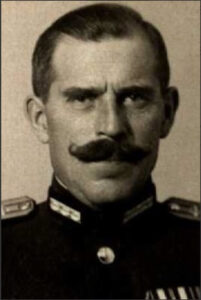 Made of solid gold, silver and enamels. Measures 45.71 mm in height, 43.16 mm in width and it weighs 29.4 gram without its screwplate. The serial number is located at the 6 o’clock position and the mint mark Monetni Dvor at the 12 o’clock position of its reverse.

This original order of the Patriotic War is in nice condition with medium wear on the higher laying parts but all details still visible. The white and red enamels show some small dings and cracks and a larger (but superficial) chip at the 3 o’clock ray of the red star. Its screw has not been shortened and the order comes with its original and well fitted silver screwplate.

Brief description of his feat of arms or achievements:

“Defending the crossing over the Desna river, comrade MONTRYKA’s regiment personnel has exhibited exceptional examples of courage. They provided rapid close artillery support to our rifle and armour units in the field and ensured their success.

The full translation of the research can be found below:

Lt. Colonel Mandryka was highly decorated and was awarded another Order of the Patriotic War 1st class, two Red Banners, an Order of Lenin and a Red Star. More information can be found here