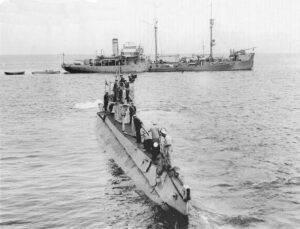 This Medal of Ushakov is in excellent condition. There are several dings and scratches and the higher laying parts show some wear although the details are perfectly visible. Both sides (but especially the reverse) show a dark patina. It appears two letters are carved on its reverse by the awardee (?). Possibly two M’s although I am not sure.

“Comrade TESLYK participated in the combat operations on the floating batteries “Red Georgia” and “Red Adjarisatan” from the beginning of the Patriotic war.

In all the combat operations on the floating batteries “Red Georgia” and “Red Adjarisatan”, he proved himself as a brave, courageous, and strong willed warrior. Under hurricane of the enemy fire, he participated in setting up the landing bridges and providing for disembarkment of ammunition, supplies, and the personnel.

For exhibited courage and bravery in battle, he is worthy of a state award “USHAKOV” medal.

Red Navy sailor TESLYK took part in the Patriotic war from its very first day until the Victory day. He exhibited courage and bravery in battle. He is worthy of a state award – “Ushakov” medal.

The full translation of the research: Citation Ushakov Medal

Two images are added to the picture gallery of the floating battery ‘Red Georgia’. The second one is of its current remains.