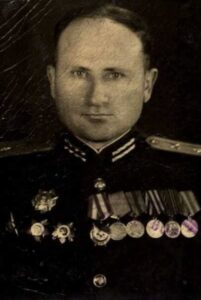 For destroying an enemy dugout used to amass the enemy troops, an enemy supply caravan and several fortified targets in the village of Tychkino (Russia)

Made of silver and enamels. The order measures 49.00 mm in width, 46.96 mm in height and weighs 32.63 grams without its screwplate. The serial number is located at the 6 o’clock position and the mint mark on the 12 o’clock position of its reverse. This early variation has a round base ‘heel’ of the screw.

In an excellent, well above average condition with the details of the raised silver parts like the soldier are mostly visible. The enamels are absolutely stunning and show some minor contact marks only; no chipping or repairs. The reverse is in excellent condition too and shows an appealing dark toning. The dots and stripes are not scratches but appear to be small production flaws. The order comes with its time period and well fitted silver screwplate and its screw has not been shortened.

An early award in excellent condition with interesting research. Scarce as such!

Brief and specific description of the personal feat or merits:

On 26.03.1942, his precise fire destroyed an enemy dugout used to amass the enemy troops. The fascist crawling out of the wreckage were hit by the shrapnel fire and eliminated.

On 30.03.1942, his battery opened fire at the enemy force fortified in the village Tychkino. With the very first shell, he hit and destroyed the house occupied by the Fascist troops, and the next 3 shells hit the Fascist who ran to help the wounded. Having received the intelligence on the location of the enemy ammunition depot, he directed his precise fire at a shed used by the enemy causing the ammunition to explode. He scattered and partially eliminated the enemy infantry concentration preparing for a counter-attack on the outskirts of the village. Four salvoes hit and damaged the enemy dugouts.

On 02.04.1942, he hit and destroyed an enemy supply caravan, which was approaching the village Tychkino.

He prepared and trained well his gun crews, who are now prompt in executing their combat missions.

The full translations can be found below:

More information on Lt. Sitolenko can be found here

3 scans of images of Lt. Sitolenko were found online. One off them shows him wearing this Order of the Red Star