Soviet Documented group to a Hero of the Soviet Union 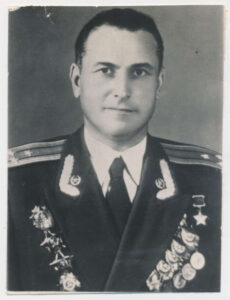 This group consists of the following items:

This gold star is in excellent, well above average condition. There are relatively few small dings and scratches and the edges and details are crisp. The tips of the star are still sharp and pointy which is quite unusual considering the star is made of pure gold.

All parts are original. Including the screwplate, suspension, hexagonal plate and the quadrangular plate.

Made of 23 ct gold, platinum and enamels. Measures 43.15 mm in height including the eyelet, 38.28 mm in width and weighs 33.0 gram without its suspension.

This early suspension variation Order of Lenin is in nice condition with all details crisp. The red enamels are beautiful and problem free and only show some minor contact marks. Lenin portret made of platinum shows almost no wear and the gray enamel background is in pristine condition. The double layer steel suspension is time period to the order and its connection ring has not been cut.

Citation for the Titel of Hero of the Soviet Union:

“In the struggles for the capture of the city of STREHLEN (today:”Strzelin”,Poland), on March 24, 1945, the regiment broke through the most fortified front section in the “STREHLEN” (see image gallery) area above height 168.8 to the bridge over the river “KLEINE LOHE” north of “PETERWITZ” (Today:”Stoszowice”, Poland). Due to the success in further developments, the regiment also captured a well-fortified point of enemy defense near the village “PETERWITZ”, district of “STREHLEN”. Later in the course the regiment marched to height 178.8 and broke through to a large enemy base in “KORSCHAU” (today:”Karszów”, Poland).

The enemy had drawn together reserves (2 Grenadier battalions with tanks and self-propelled guns, artillery support, mortar support and up to 50 aircraft “Ju – 88”) and carried out the heaviest counterattacks on Regiment 294, but all attacks were warded off with great losses to the enemy.
During this operation from March 24 to 28, 1945, the regiment fought off a total of 18 counterattacks.

A battalion of the 54th rifle regiment, the 100th light Grenadier division and the 17th independent SS battalion were smashed. The following were destroyed: 1 tank, 6 assault guns, 5 field howitzers, 27 machine guns and up to 500 soldiers and officers. Captured of the enemy were: 20 non-commissioned officers and soldiers.

The regiment continued to breach into the enemy defensive lines on the river “NEISSE” on April 16, 1945. On the first day of the battle, it occupied with two companies, high speed and success, a large residential area northwest of MUSKAU (today:”Bad Muskau”). The regiment also contributed to the complete annihilation of the “Führer-Escort Brigade” and reached TORGAU on the river ELBE.

Subsequent counterattacks by the SS tank division “Herrmann Göring”, the 20th and 2nd Grenadier divisions from May 1st to 3rd, 1945, the regiment successfully fought off north of DRESDEN.

The regiment continued to fight and destroyed south of “ORTRAND”: 19 tanks, 11 assault guns, 12 armored personnel carriers, 37 trucks with ammunition and military equipment, 18 guns and up to 2,800 soldiers and officers.

He is worthy of the title “HERO OF THE SOVIET UNION”, the
Order of Lenin and the “GOLDEN STAR” medal.”

More info about Hero of the Soviet Union Kharitonov can be found here, here and here

This set to platoon leader Petr Davidovich Mogilevsky is included in the sale because not only was Kharitonov, Mogilevsky’s commanding officicer, he signed the documents of his campaign medals too!

This group consists of the following items:

The order is in excellent condition with crisp details and flawless enamels.

Made of silver and enamels. Measures 46.48 mm in height, 44.50 mm in width and weighs 27.1 gram without its screwplate. The order is in excellent condition with crisp details and flawless enamels.

Medal for the liberation of Prague with its award document signed by Kharitonov (!)

Made of gold plated brass. Measures 32.19 in diameter and weighs 17.3 gram. In excellent condition with crisp details and most gold plating present.

In the picture gallery images of the award document can be found displaying Kharitonov name and signature. The stap shows the 294th infantry regiment.

Medal for the Victory over Germany with its award document signed by Kharitonov (!)

Made of gold plated brass. Measures 32.13 in diameter and weighs 16.8 gram. In excellent condition with crisp details and most gold plating present.

In the picture gallery images of the award document can be found displaying Kharitonov name and signature. The stap shows the 294th infantry regiment.

The jubilee medals, badges and documents are all in excellent condition

Citation for the Order of the Red Star

“In the regiment he participated in breaking the German defenses in the area Prokhorovka (Kursk region.) on June 7, 1943 as commander of the mortar platoon honorably fulfilled his objectives. In this battle, the platoon killed 50 German soldiers and officers and repulsed 10 counterattacks, after which he was wounded on the battlefield.

More information on Mogilevsky can be found here

Please contact us if you have questions about this lot